The visual effects that can be created onstage nowadays are AH-MAH-ZING! ✨💥🔥💨

However, you might have noticed that they can create difficulties for your voice… It’s important to know the different kinds of effects, how they might effect your (vocal) health, and what the safer alternatives are. Talk to the people designing your show, in order to find a healthy compromise between visual greatness and vocal performance. Better be safe than sorry!

Instead of writing a blog myself, I’m sharing the well-written below article by Yolanda D. Heman-Ackah, MD, MS, FACS. It was first published in the VASTA Voice Volume 17, Issue 2, June 2022. I’m sharing it with you, with permission from both the author and VASTA, and have added pictures myself, for clarifying purposes. 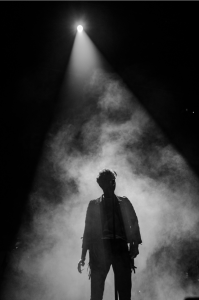 In an attempt to create standards for theatrical fog, the Entertainment Services and Technology Association (ESTA)’s Fog and Smoke Working Group developed practice recommendations for fog and smoke in open settings using a consensus-based standard. This standard has been accredited by the American National Standards Institute (ANSI). The ESTA Fog and Smoke Working Group consists of a cross-section of entertainment industry professionals who represent diverse interests. Because of issues related to concentration of the fog in a particular location, the proximity of the greatest density of the effect, and the surrounding ventilation, one should be cognizant of the fact that a fog can produce effects that pose health hazards despite the fact that they meet minimum ANSI standards for safety.

Smoke is created by either pyrotechnic smoke cookies or smoke cartridges or by incense or HVAC smoke pens/pencils. The smoke generated consists of large solid particles produced from combustion. Because smoke is created from combustion, the biggest health hazard is a thermal injury from the pyrotechnic. Fire extinguishers should always be nearby. Additionally, smoke is a respiratory irritant and can cause issues with vocal fold inflammation and reactive airways. Symptoms of a toxic exposure may include hoarseness, cough, difficulty breathing, headaches, dizziness, drowsiness, tiredness, and mental confusion. 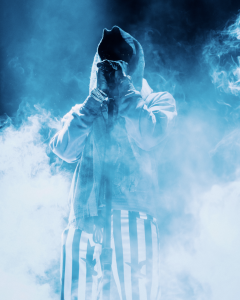 Fog is created by fog machines that dump glycol, glycerin, or a glycol/water mixture into a heat exchanger until the liquid vaporizes. The vaporized glycol produces a thick translucent or opaque cloud as its visual effect. Fog from vaporized glycol or glycerin causes irritation and dryness of the nose, throat, vocal folds, and lower airways of the lungs, which can manifest as cough, dry throat, reactive airways, worsening asthma, and decreased lung function. These effects can be both acute from acute exposure and chronic from repeated or long-term exposures. The fog created by fog machines can also leave a residue on exposed items, furniture, and the floor, which can be slippery.

Haze is a homogenous cloud used to reveal light beams. Haze is produced by a haze machine that atomizes the mineral oil using a spray pump powered either by electricity or compressed CO2. Haze can also be produced using a glycol/water mixture, often referred to as “water based” haze. Chronic inhalation of mineral oil vapor can predispose to lipoid pneumonitis or pneumonia. Like the other glycol vapors, the water-based haze can also cause irritation to and inflammation of the nose, throat, vocal folds, and lungs. Haze can also leave a residue on the furniture, floor, and other exposed item that can be slippery. 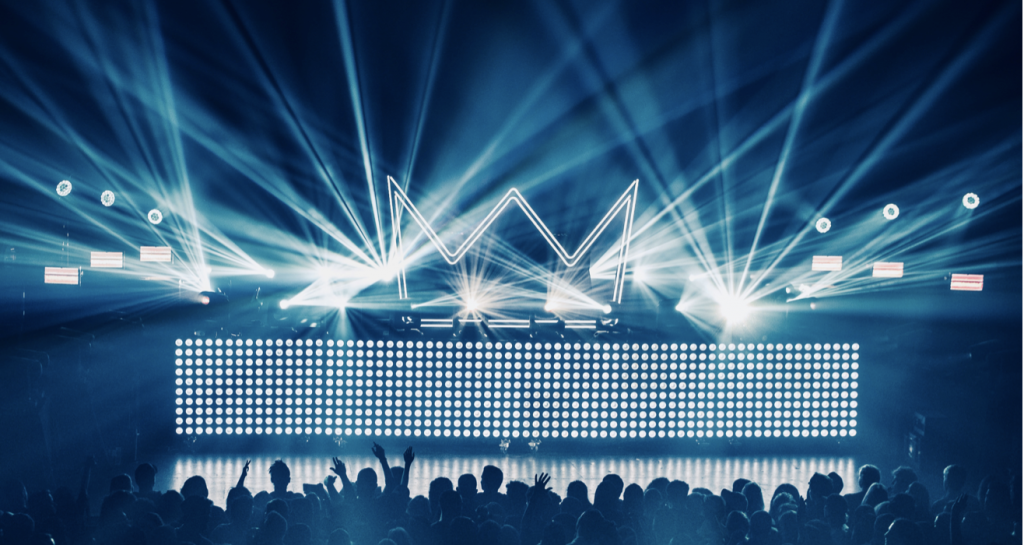 Low lying effects are produced by liquid carbon dioxide (CO 2 ) used in conjunction with theatrical fog machines. The liquid CO 2 is used to chill the fog, which causes it to stay within a few feet of the ground. As the fog warms, it rises and dissipates. Dry ice, which is solid CO 2 , can be dropped into hot water. In so doing, the heat causes the solid CO 2 to sublime immediately to the gas phase that appears as a thick white fog. A fan is used to direct the direction of the fog to create a rolling fog that lies low to the ground. Liquid Nitrogen can be used in a similar manner. When liquid CO2, dry ice (solid CO2), and liquid Nitrogen are used to create fog, the fog is created from the transformation of the CO2 or the Nitrogen from a liquid or solid state into a gas state. In this transformation, the percentage of CO2 and Nitrogen within air is increased and the relative percentage of oxygen is decreased. This shift in the relative percentages of CO 2 , Nitrogen, and oxygen in poorly ventilated areas can be toxic and cause headaches, nausea, vomiting, blurred vision, dizziness, shortness of breath, decreased cognitive function, and altered ability to reason to everyone in the environment who breathes the new gas mixture. In high concentrations, loss of consciousness and death can occur. Ensuring adequate ventilation, including an adequate space for the fog to dissipate and for fresh air to enter the area is extremely important, especially for those seated in the orchestra pit or working at the base of the stage who are more likely to be affected by the thicker concentrations of these fogs.

Thus, there are some health effects possible with all forms of theatrical fog. The extent of the exposure, including the concentration of the fog material in the surrounding air, the length of exposure, and the ventilation in the area are all factors that determine the severity of acute health effects. Chronic or repeated exposure can cause long-term vocal fold and airway irritation and inflammation. Limiting exposure duration and concentration and increasing ventilation onstage are factors that will help to limit health effects from theatrical smoke and fog. Glycol, water/glycol mixtures, glycerin, mineral oil, and smoke-based fogs are most likely to cause vocal fold, nasal, throat, and lower airway lung inflammation, dryness, and reactivity and should be avoided whenever possible in favor of liquid CO 2 , dry ice, or liquid nitrogen based fogs. Theatrical fog should be used in an area where there is adequate ventilation that permits the easy and quick egress of the fog and influx of untainted air. 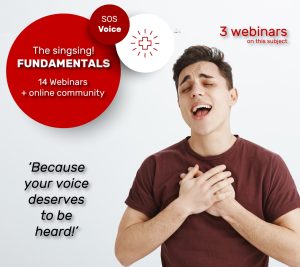 Applying this knowledge is an important form of self-care. Do you want to learn more on how to do this?

Buy access to the recordings of one or more webinars on SOS Voice, and start to take care of your voice in all possible ways! 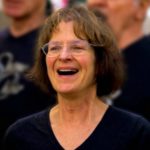 Wow, Sarah! What a library of valuable resources... How wonderful. Thank you so much!

Wow, Sarah! What a library of valuable resources... How wonderful. Thank you so much!
https://www.singsing.be/onlinecourses/testimonials/10-janet/ 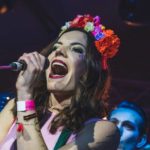 After these exercises, my sound is more ringy to my ear. The transitions between registers are smoother and all is more effortless. Thank you so much for a wonderful course!

After these exercises, my sound is more ringy to my ear. The transitions between registers are smoother and all is more effortless. Thank you so much for a wonderful course!
https://www.singsing.be/onlinecourses/testimonials/10-sarah/ 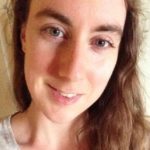 Happy to find a teacher that considers warming up as more than just voice exercises and incorporates the mind & body!

Happy to find a teacher that considers warming up as more than just voice exercises and incorporates the mind & body!
https://www.singsing.be/onlinecourses/testimonials/10-manon/
0
0
singsing! Sarah Algoet webinar on SOS Voice Part 3

As always, feel free to send me your thoughts, questions, and feedback in the comments below this blog, via the contact form or in the singsing! online community ❤️

Your email address will not be published. Required fields are marked *

We use cookies to ensure that we give you the best experience on our website. If you continue to use this site we will assume that you are happy with it.OKNoPrivacy policy